Symbiosis ÃÂÃÂ» Compost
Compost
To economize the use of resources and maximize the value of food waste, Symbiosphere 1 Center constructs a compost system wherein rich soil is cultivated. 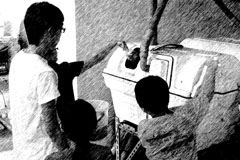 First, the urine collector accumulates the urine that the inhabitants excrete into low-flow toilets. The accumulated urine, when reaching a certain amount, is discharged into the fishpond via a reclaimed-water system, thus entering the symbiotic cycle.

Second, the central processor mixes feces with peat and microbial bacteria. The product of their reaction, after being composted again or baked and then combined with soil, becomes compost soil that facilitates the growth of plants.

Third, leftover compost is a process whereby leftovers from symbiotic meals (such as vegetable shreds and fruit skins) are intermingled with compost soil in a ventilated compost bin. Aerobic bacteria in the soil will decompose the compost until it is ripe to be used as fertilizers.

Finally, earthworm compost is a process whereby earthworms are fed with leftovers (such as bean dregs and fruit skins) in a ventilated compost bin. The purpose is to gain earthworm feces, which has the highest fertility among natural fertilizers due to its richness in aerobic bacteria and beneficial microorganisms that facilitate the growth of crops. Compost product made by following the aforementioned procedures needs to be tested for its physical and chemical properties before used on plants so as to guarantee the quality of compost soil as well as the integrity of the entire symbiotic cycle.